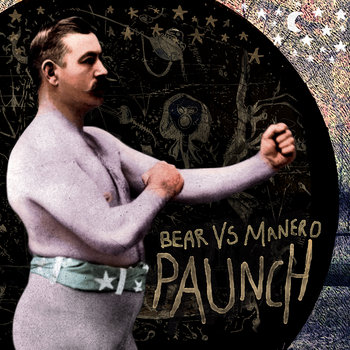 None of these words will really matter if you just purchase/steal this debut album from Bear vs Manero (BvM), trust me, you shan’t be disappointed.

Hailing from the depths of the Medway delta, Bear vs Manero release Paunch through Skingasm Records. The album was recorded with Greg Webster of Punching Swans at Sunlight Studios in Gillingham over 2 days.

Following on from previous singles “Now Is Not The Time For Impressions Rory Bremner”, “The Tale Of The Chameleon And The Malcontent Cockroach” and a couple of EPs (their own Bi-Facial and last year’s collaborative split concept EP with Frau Pouch, Yee Naaldlooshii), Bear vs Manero will ruin people’s mornings, afternoons, nights & lives by releasing this monstrosity to the world. And, by god, this monstrosity is a thing of beauty. 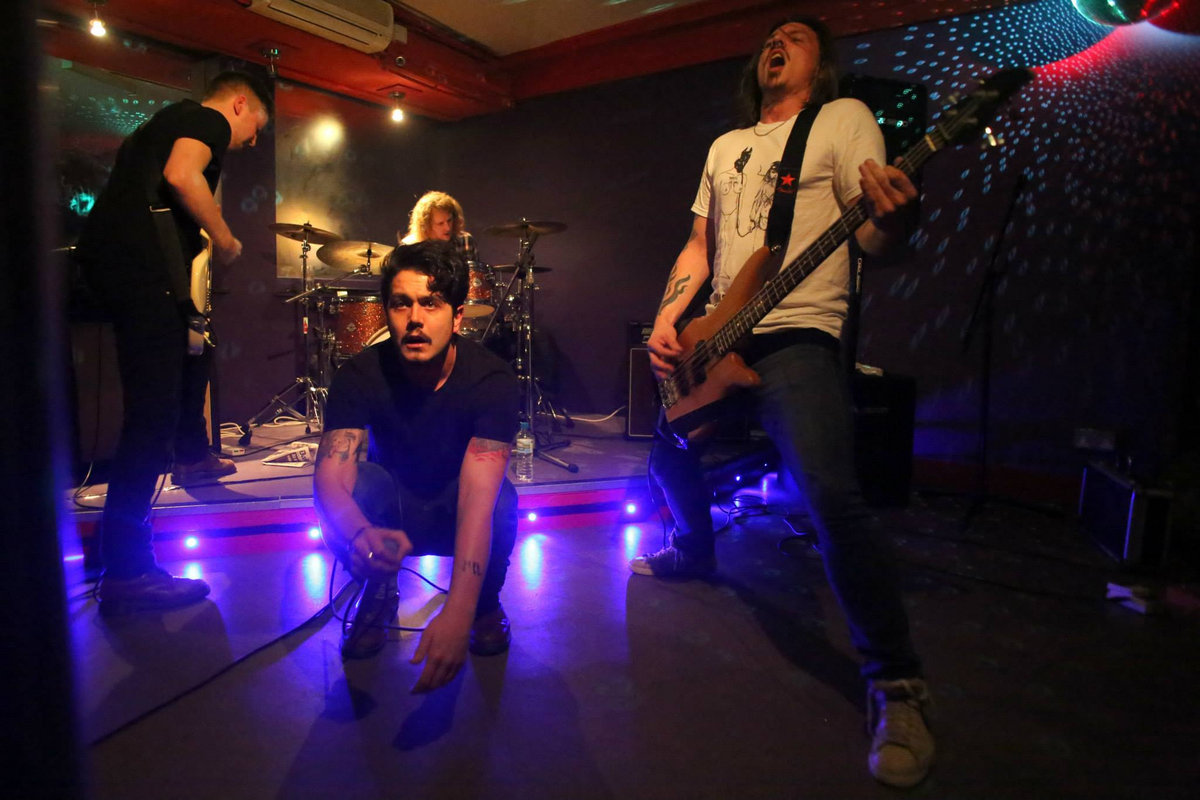 The album opens with “Bad Teeth“, a fine example of what you have let yourself in for, unrelenting heavy riffs (Luke Belly), fierce over-driven gut-wrenching bass (Peter Bevan) and an atmosphere full of the impending doom we are about to witness. Just under a minute in and finally the beast with the sticks (Darren Wooley) is let out of his cage, showing us that he is truly a wizard behind that kit. Chaos is unleashed like Saville on Top of the Pops, the track intensifies and speeds up, before crashing down in BPM to smoothly welcome you to the next track and introduce you to the album.

You have been warned.

The next track is “Infinite Apples” which comes with a new music video. On a blistering hot Sunday a group of 30 or so guys, girls and vermin all dressed in black, a Goth army if you will, descended on Rochester to be involved with BvM’s video. The darkness of the video perfectly matches the tone of the song. “Infinite Apples” is the first time that vocals (Dan Toms) appear on the album, I’ve tried many times to describe his vocal style, every time falling flat on my face – screams that at times seem inspired by the post hardcore genre but then turn into the manic gut-wrenching shrieks of a psycho, warning the world of the horrors they’ve seen.

“YRANYRBYW” is an attack on the sort of people, that if you don’t already, you should f*cking despise. The song addresses an ignorant generation that cannot see the world in front of them. BvM warn, “your rights are not your rights, because you’re wrong.” Luke Belly opens with some very clean, nice sounding guitar. For a second it confused the sh*t out of me, before quickly returning to the tone I have become accustomed to. The following track and lead single “Bonjour Bonnet,” has been described by BvM, as “a song about neither fancy headwear nor the French.”

“Brazillian Snooker” opens with Peter Bevan leading and encouraging us to step into this tale. To let yourself become immersed and lost in this wondrous, nightmare fueled, adventure. Eerie, slow guitar fills the verses with Tremelo guitar picking, filling the chorus and giving a sense of urgency and despair. The vocals remind you that there is something you shouldn’t trust here.

“Water Sheep,” the final track of the album does not let up or give you a second to catch your breath. 2 minutes into the track and the whole band as this point falls apart, by that I mean total chaos ensues, screams for us to “STAY AWAY FROM THE WATERS EDGE.” Guitar and Bass filling up the airwaves with warning sounds and drums that don’t falter from sheer volume and epic technical ability but finally slow down like the heart beat of the last person who didn’t heed the band’s warning.

Bear vs Manero, is a four piece with inspirations spanning many different genres. All combine to make one darkly beautiful album like the scene from Quills, where the writer, without access to ink, uses his own shit to plaster the walls with his next chapter of works. I mean who the funk thought of that and whoever they are they need a round of applause. Just like that scene, this album will do great things, including dragging you out of your comfort zone and leaving you wanting more.

With Radio support from: 6 Music, Radio 2, Xfm, Kerrang, Absolute & Artrocker to boot this gathering of Chaos is already widely well received and deservedly so.

Expect to hear/see and feel a lot more of Bear vs Manero. If you aren’t ready in time then you might be too late.

My summary:
You should,
Buy this album.
Go see them live.
Share: