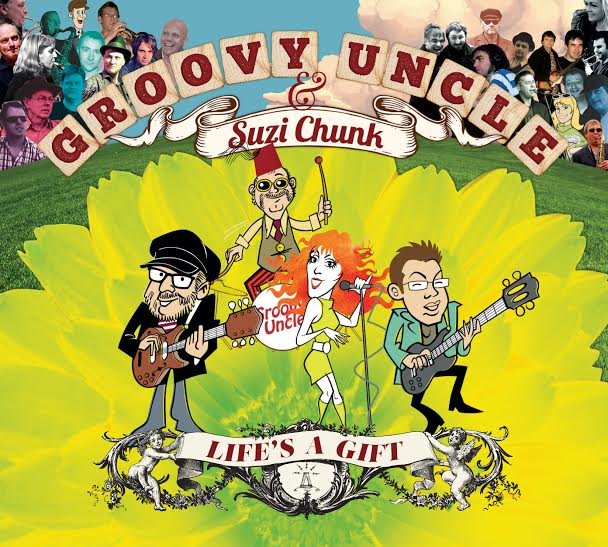 Life’s a Gift is the 5th album from Groovy Uncle & Suzi Chunk. According to their website, “Groovy Uncle is an often changing band of musicians hand picked by songwriter Glenn Prangnell for various recording projects.” And according to the cd case, Glenn is on vocals, guitars, keyboard, mellotron and percussion as well. Is this Glenn character a musical genius as well as a groovy uncle? Let’s have a listen and find out.

The album kicks off with “Your Tiny Mind“. It’s the sort of song you can imagine your nan dancing to after she’s had a couple. It reminds her of the old days, before all this beat-boxing. It sounds like a band that would have been touring with the beach boys back when she was young. It’s fun, catchy and all that. She smiles as she dances away and a small tear drops from her eye as she thinks back to her youth, lost friends and good times.

“My Destination” is different, it bangs in with a harmonica and is a happy country sounding number. Glenn’s changing it up, i like this guy. But, he sings “I don’t even know my name” throughout the song. And quite frankly, I believe this to be a lie. I’ve been in some horrific conditions due to mind altering substances and have always been able to supply my name when prompted. What else is Glenn lying to us about?

The 5th track, “My Precious Time“, is the first time you really hear Suzi Chunk smash it. It’s a chilled out swingy stoner song and Suzi sounds superb. Bit of a tounge twister, that one. It’s a love song that doesn’t get too cheesey or Ed Sheeren-y.

The next track starts with Glenn and the line “She was just an awkward unattractive little girl”. I’m only thinking one thing – I miss Suzi. Her lovely voice, warm smile and the way she just lights up a room. This song is called “Married to the Captain of the Team” and it’s about a “WAG” that’s a singer or something. Before you are a minute into the song Glenn belts “Just mime your hits, and then flash your tits, cos they’re both worth 50 grand!” I really do miss Suzi.

Suzi is still missing on the next track, “Joni’s Birthday“, but this is an interesting song. It’s a happy song that sounds like a mix between “blackbird” and “Octopus’s Garden”. This is the point you start suspecting Glenn is writing this album on acid. His happiness, chilled out vibes and detest of WAGs being sluts – It all makes sense. You think, “No, surely not. Glenn seems like a chill guy.” Then the line, “Now it’s Joni’s Birthday, we’re going to ride a magic bus”, really gives the game away. Why Glenn? Think of the children.

The next couple of tracks are all suzi. She’s great. She sounds good, seems fun and is much more attractive then my wife. Then, Glenn goes a bit ‘Chas and Dave’ on the last track, “Tea and Cake“. The song starts with footsteps while Glenn talks to Jim Riley, the producer of the album. This is a genuine excert of the conversation:

Jim: “Where’s Suzi?”
Glenn: “She’s got the raging hump, we had a right old barny”
Jim: “Why, what happened?”
Glenn: “All i said was get the kettle on sweetheart, I’m spitting feathers here, babe. Nice one, no sugar… And course, she gets a face on and starts going all northern about it, don’t she?”

I think this is when the acid had really kicked in. It’s just two guys in a room completely chonged – Suzi probably wasn’t even there that day. The song started ‘Chas and Dave’ and it doesn’t stop being ‘Chas and Dave.’ Glenn sings, “nice one, no sugar” quite a lot and the song seems to be about two pals being friends even though they argue. Maybe he’s not on acid. Maybe this song is actually about that conversation with Suzie and the friendship they’ve had over the years. How sweet.

Overall, this is an interesting album. Glenn is just having fun and Suzi is a talented singer with lucious ginger locks. There are an assortment of songs on the album in which Glenn travels through a few genres before he arrives at his final destination, ‘Chas and Dave’. There are a lot of different instruments and musicians on the album that all sound great. Nick Rice supplies smooth bass, Wolf Howard gives us crunching percussion and Pete Mathison brings banjo and “spoons” to the table. Is Glenn on acid? At this point, I’m not sure. Let’s give him the benefit of the doubt and say he’s just a wacky character.
Share: