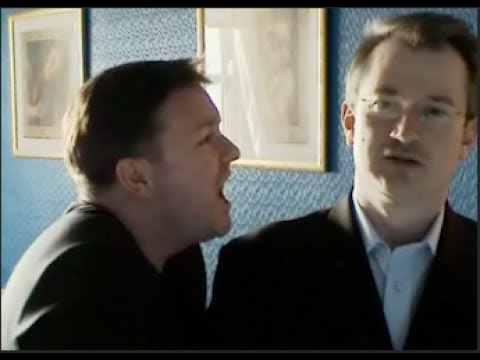 Robin Ince is a British comedian and a friend of Ricky Gervais. They have a history that could be summed up with a simple soundbite: Ricky horrifically torturing Robin.

Ricky likes to spread rumours about Robin including “Robin has suckled milk from a cow’s udder” and “Robin once had worms. To get rid of them he sat on ham to lure the worm out of his anus.” Both of these rumours have been talked about on radio without Robin being present.

Ricky’s main tactic of torturing Robin is constantly making annoying noises or singing songs he has made up until Robin gets incredibly annoyed.

Is it bullying and harsh? Well, that’s not for me to say. Is it hilarious? Absolutely. 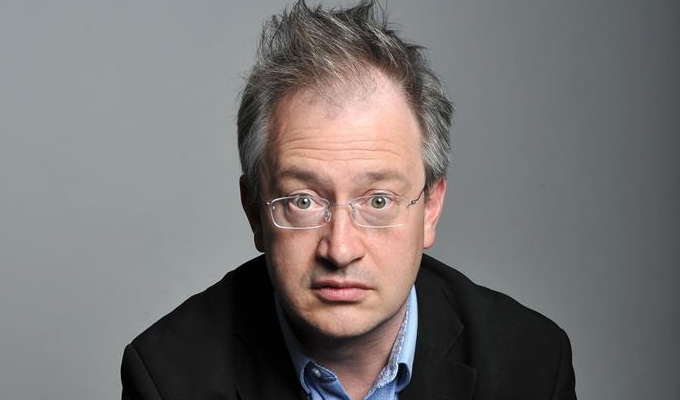 Ricky went on tour with his second stand up show “Politics” and took Robin (pictured above) with him. Robin had no idea what he was in for. There was plenty of Ricky screaming at him and hiding in his dressing room to jump out and scare him.

The following quotes from the pair paint the picture of the tour and their relationship perfectly.

Hello, I’m Robin Ince. I’ve known Ricky Gervais for 12 and a half years, I’m his support act on the politics tour…

Basically, over a period of 12 years, the majority of it – 10 and a half years – have been frequent agony and I really don’t understand why I still hang around with him…

I kind of didn’t mind it initially and by showing that weakness, I have been destroyed by it.

It started off, I knew he was funny. I liked the way he looked with his silly little glasses and his hair up. And he was snipey. And he was a little bit, sort of, nerdy and book wormy….

I think about him most the time. I wake up and he’s the first phone call because I want to see what he says, I wanna go what you doing..

You know a 5 year old gets the present they knew they wanted… They run around the room and they wanna kiss it and bite it. And they wanna play with it. That’s how I feel when Robin is around…

Robin talking about Ricky jumping out and scaring him:

I forget how peculiar it is. It’s peculiar to be a 42 year old man and hide in a shower cubicle waiting to leap out in a dressing room, sometimes for 15/20 minutes. And he’s not a patient man.

50% of the reason for doing this tour was that I knew I was going to be with Robin.. to get him away form home so he’s just mine…

[Ricky] was on top of me going aaahhh ahhhh and I was going ‘I’ve got to work this out, I know what you get out of our friendship, what do I get out of it?’ and he said ‘I like it’

The only rest I get [on the tour with Ricky] is standing in front of 2,000 people…

I don’t know why I remain friends with Ricky. It’s almost too late now, there’s no way to get round it. Eventually I will just come home and he will be hiding in a cupboard.

How Does Ricky Get Away With It?

Why does Robin let this happen? This quote from Ricky explains it:

You’ve got to have the sort of serious moments because that lulls him in to a false sense of security. There’s a saying, ‘you can fleece a sheep as many times as you want but you can only skin it once’. So I never want to push him over the edge so he gets really angry and moves to Australia. I wanna’ just slap him around a little and before it gets too much I go anyway Robin, aren’t ‘The Smiths’ good? 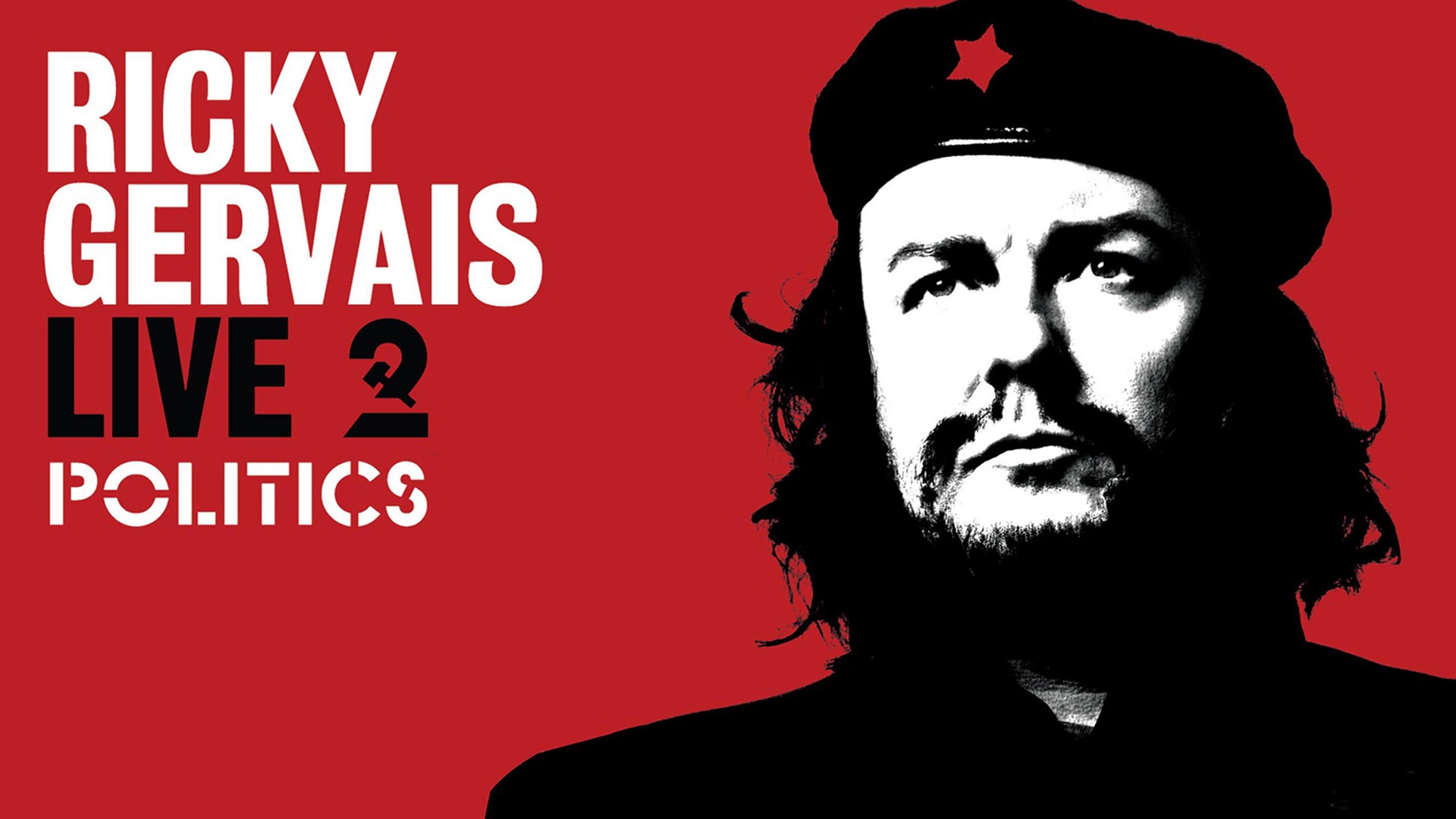 Tormenting Robin on tour wasn’t enough for Ricky so he had the genius idea of inviting him to do the commentary for the DVD. Why should Robin suspect anything? He was with him for the tour after all.

It starts off fairly normal with them introducing themselves, talking about the theatre, Ricky walking on stage, etc. Then at about 7 minutes in Ricky says, “I have a diary here, Robin, that you may recognise. Just to the listener at home, for one month from September the 10th til October the 10th 2001, I kept a diary for Robin… And maybe I should read some.”

I don’t want to give too much of the diary away but here is the first entry:

“September the 10th 2001. I called Robin, he was in a car on the motorway, he can not drive. Then, I called him later at 11:46pm and he was on a train. So he was taken somewhere and made to find his own way back. I was in bed and he was still on the train…

Once, first thing in the morning, 10am, Robin came in to work to do writing at Talkback (production company), he turned up with a big coffee. We got ours for free. Then he spilt it all over his genitals, testical and penis, and went mental. And more mental when I laughed. He said to Steve (Merchant) ‘Isn’t it f*cking annoying when someone laughs at somebody else’s misfortune?’ This made me and Steve laugh. He kicked Steve’s bag as he stormed out. Steve went ‘Steady on’. When he came back, we discovered he had kicked some of the tiles off the wall in the toilet.”

And some entries start getting REALLY close to the bone…

“Alex Zane needed a comedian to do his club urgently tomorrow night. It’s only £50, it’s in New Cross, and 24 hours notice. Guess what? Robin said yes… I was having a drink with Alex… and Glen Wool. Glen is a Canadian comedian. I hadn’t met him before but we soon got bonding making jokes about all sort of things but mainly Robin. I wonder if Robin knows how many comedians laugh at him. If only they could all be at every one of his gigs.”

At one point Robin says, “Do you remember when you read this out at that party and Mckenzie Crook (Gareth from The Office) said ‘can you stop reading this out? It’s really freaking me out.’ You actually began upsetting people.” Ricky replies, “No, they loved it. When you went, they were just worried it was upsetting you, then we read it all.”

Whether it sounds like bullying to people or not, they are still friends to this day. So as far as we are concerned it’s okay to laugh. Check out the DVD commentary video on Youtube: